The Ring Event was the first event released. It was released on October 8th, 2009 and was supposed to end on October 15th, 2009, but was extended until October 29th, 2009. The Ring Event is also the first event and also the first to have been extended. This event was also brought back on December 10th, 2009 and lasting until December 24th, 2009—the exception is you could only earn Chibi Coins this time around—no items.

The event involved users having to meet up with another user for the first time and pressing the ring button in order to make your rings touch. If the rings touched and it was the first time you ever touched rings with that user, you'd be granted either up to 30 Chibi Coins or one of 9 different items. 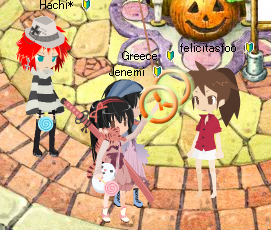 Add a photo to this gallery
Noodle Hats (Bandannas and Headgear)

White
Add a photo to this gallery
Retrieved from "https://tinierme.fandom.com/wiki/Exchange_Rings_Event?oldid=7839"
Community content is available under CC-BY-SA unless otherwise noted.